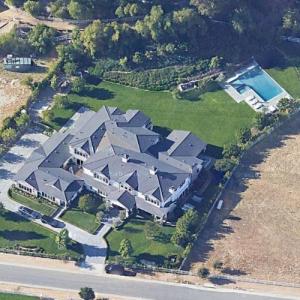 The mansion was built in 2015 and sprawls out 13,200 square feet seated on 1.4 acres. It features 8 bedrooms and 11 bathrooms, a 2-story foyer, a wine room encased in glass, a gourmet kitchen with two islands, a game room with a bar, a home theatre, a gym, a massage room, a 6-car garage, and much more. The outdoor space hosts a balcony, patio, BBQ area, outdoor kitchen, a fire pit, and a swimming pool with attached spa.

Jenner's home is a beautiful cape cod styled home. The interior displays beautiful tray ceilings, rustic wood flooring, many custom built-ins, beautiful neutral herringbone patterned kitchen backsplash which ties into the inlaid herringbone patterned marble floors and shower of the master bath. The open concept space flows seamlessly from the kitchen to a great room with a fireplace and out onto a covered patio making it the perfect house for hosting lavish parties.

Kylie Jenner's net worth has been estimated at $900 million as of 2018, making her the richest of all her Kardasian family. In fact, Jenner, at age 20, has been named the the youngest person on the fourth annual ranking of America's Richest Self Made Woman. With her cosmetic line (Kylie Cosmetics) growing, it's been estimated that within a year or so she'll become the youngest made self-billionaire ever, taking Mark Zuckerberg's place who became a billionaire at age 23. Much of her success is attributed to her social media following on Instagram.

Many of Kylie Jenner's other homes (two in Hidden Hills and one in Calabasas) are also featured on this site.
Links: www.dirt.com, en.wikipedia.org
280,944 views