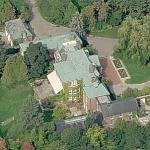 By jdubble07 @ 2011-04-02 14:50:33
@ 43.73284444, -79.37476988
Toronto, Canada (CA)
Conrad Black is a Canadian-born member of the British House of Lords, historian, columnist and publisher who was for a time the third largest newspaper magnate in the world. Black controlled Hollinger International, Inc. Through affiliates, the company published major newspapers including The Daily Telegraph (UK), Chicago Sun Times (U.S.), Jerusalem Post (Israel), National Post (Canada), and hundreds of community newspapers in North America.

He was convicted of fraud in a US court in 2007 and sentenced to six and a half years' imprisonment. On July 19, 2010 Black was granted bail. The U.S. 7th Circuit Court of Appeals overturned two of the three remaining mail fraud counts in October of that year.
Links: en.wikipedia.org
4,473 views