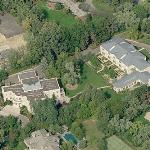 By jdubble07 @ 2011-10-23 07:49:45
@ 43.73573407, -79.37106321
Toronto, Canada (CA)
Lee Ka Lau is one of the three founders of ATI Technologies Inc. which was a semiconductor technology corporation based in Markham, Ontario, Canada, that specialized in the development of graphics processing units and chipsets. Founded in 1985 as Array Technologies Inc., the company became publicly traded in 1993 and was acquired by Advanced Micro Devices (AMD) in 2006. As a major fabless semiconductor company, ATI conducted in-house research and development and outsourced the manufacturing and assembly of its products. ATI and its chief rival Nvidia emerged as the two dominant players in the graphics processors industry, eventually forcing other manufacturers into niche roles.

Lau owns these two homes (the white house is the main residence and the other is a sports complex) which total nearly 40,000 sqft.
Links: en.wikipedia.org
5,053 views