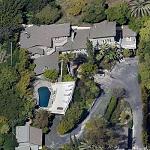 He is the host of The Late Late Show with Craig Ferguson, an Emmy Award-nominated, Peabody Award-winning late-night talk show that airs on CBS.
Links: en.wikipedia.org
0 views
Unrated

Comments have been disabled for this map
Similar Maps: Homes - Celebrity - Entertainment - Misc