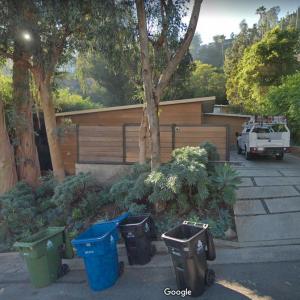 By VirtualGlobetrotting @ 2019-05-14 15:55:30
@ 34.1011857, -118.3718968
West Hollywood, California (CA), US
Dakota Johnson, the actress best known for the role Anastasia in Fifty Shades Of Grey, lives here. She is the daughter of Melanie Griffith and Don Johnson. Her grandmother is Tippi Hedren, star of Alfred Hitchcock's The Birds. She made her first film debut alongside her mother and sister in Crazy in Alabama. She often works with director Luca Guadagnino. She has been multiple films directed by him such as A Bigger Splash and Suspiria.

Johnson was discouraged from pursuing acting further until she completed high school, after which she began auditioning for roles in Los Angeles. She was quickly cast in a minor part in The Social Network (2010), and subsequently had supporting roles in the comedy 21 Jump Street, the independent comedy Goats, and the romantic comedy The Five-Year Engagement (all 2012). In 2015, Johnson had her first starring role as Anastasia Steele in the Fifty Shades film series (2015–18). For her performance in the series, she received a BAFTA Rising Star Award nomination in 2016. Following Fifty Shades, Johnson appeared in the biographical crime film Black Mass (2015) and Luca Guadagnino's drama A Bigger Splash (2015). She reunited with Guadagnino, portraying the lead role in Suspiria (2018), a supernatural horror film based on the 1977 film by Dario Argento. That same year, she appeared in an ensemble cast in the thriller film Bad Times at the El Royale (2018). In 2019, Johnson had a starring role in the psychological horror film Wounds and the comedy-drama film The Peanut Butter Falcon.


Dakota Johnson has a net worth of $14 million dollars. Before her acting career Dakota began modeling when she was 12, after appearing in a spread in Teen Vogue and later signed with IMG Models and began appearing in ad campaigns, including a national campaign for MANGO.
Links: en.wikipedia.org
28,406 views