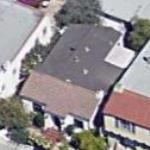 Formerly a fixture of the Los Angeles social scene, Inge claimed that her former husband, President Ali Bongo Ondimba had her kidnapped and brought back to Gabon where she was beaten and tortured. She escaped back to Los Angeles in 2008, shortly before her ex-husband assumed the presidency. She faced a difficult divorce from Ali Bongo Ondimba, who had already re-married, and she was cut off financially, forcing her to live on food stamps.