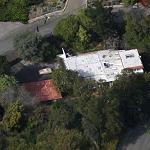 In addition to being married twice, she had been romantically linked to a number of her co-stars like Bing Crosby, Anthony Quinn, Dean Martin and lastly Burt Reynolds.

This is her Hollywood Hills house where she was found dead due to a drug-overdose.
Links: en.wikipedia.org
3,461 views