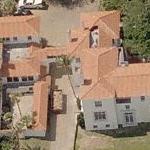 By Champion3 @ 2010-04-30 13:13:37
@ 26.68952279, -80.03466456
Palm Beach, Florida (FL), US
James Patterson is the world's best-selling author, one of the most popular of all time. Since 2006, one out of every 17 novels bought in the U.S. was written by Patterson. According to Nielsen BookScan, John Grisham’s, Stephen King’s and Dans Brown’s combined U.S. sales in recent years still don’t match Patterson’s sales of around 15-20 million copies anually. He is listed in the most recent Guinness World Record Book as the author with the most New York Times best sellers, 45, but that number is already out of date: he now has 51 — 35 of which went to No. 1. Patterson is also the most popular author in the U.K. He primarily writes thriller novels, and is largely known for his series about psychologist Alex Cross.

He bought this 21,353 sq ft mansion in 2008 for $17.415 million from Atlanta developer Charles S. Roberts. The house, built in 1924, includes a bridge that extends southward and connects it to an addition originally built as part of the Addison Mizner designed home to the south that was built in 1919.

The unusual link between the neighboring houses is rooted in a dispute between the original owners ,Eilizabeth Kay (who owned this house to the north) and Harold Vanderbilt, who bought the home (to the south) from Mizner in 1921. Around 1930, Vanderbilt built an addition on the north side of his home, and right up to his property line with Kay, who was not pleased to lose her privacy. Six years later, Vanderbilt sought to resolve the feud by selling the addition, along with 50 feet of land, to Kay. The rest of the house he sold to someone else. Rather than demolish the addition, Kay converted it into a guest house and built the bridge connecting it to her house. The houses have been connected since she did that in 1936, but they've never been in common ownership.
Links: www.nytimes.com
15,446 views