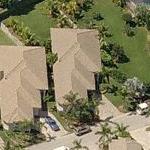 By Champion3 @ 2010-01-14 18:21:05
@ 26.64325965, -80.24020342
Wellington, Florida (FL), US
Kay LeRoy is the widow of Warner LeRoy, the founder of LeRoy Adventures, which owned and operated Six Flags Great Adventure in New Jersey and New York's famous Russian Tea Room and Tavern on the Green, one of America's most popular and successful restaurants. LeRoy was the son of film producer-director Mervyn LeRoy. It was his doing that the studio made and he partly directed The Wizard of Oz. He was responsible for discovering Clark Gable, Loretta Young, Robert Mitchum and Lana Turner. Warner was also the grandson of Harry Warner, one of the founders of Warner Bros.