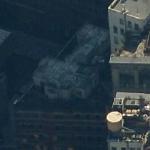 It is being reported that Taylor Swift has purchased the penthouse from Jackson for around $19.5M.
560 views