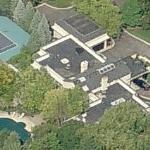 Prince reportedly paid $5.5M for the home which was given to his now ex-wife in their divorce.
Links: en.wikipedia.org
4,925 views