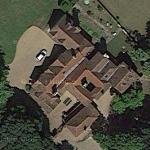 Romanoff owns this home, Provender House, which dates back to 1342, when it was built for Lucas de Vienne, who held the title of Chief Archer for Edward, the Black Prince, the eldest son of King Edward III.
Links: en.wikipedia.org, en.wikipedia.org
569 views