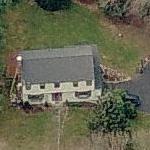 By Turneasterne @ 2012-04-05 21:21:16
@ 41.41811998, -73.23647924
Newtown, Connecticut (CT), US
Located in the Newtown, CT hamlet of Sandy Hook, this is the home of Charles A. Pryor and his wife Suzanne M. Collins. Suzanne Collins is an American television writer and novelist, best known for writing The Hunger Games series including the novel of the same name, Catching Fire, and Mockingjay. Collins is a long-time Connecticut resident. Collins was born on August 10, 1962 in Hartford, Connecticut. Her books contain graphic violence and sexuality for which a lot of controversy has been brought up due to the targeted age group of the readers.

A film adaptation of the first book in her trilogy, The Hunger Games, co-written and co-produced by Collins herself and directed by Gary Ross, was released worldwide on March 23, 2012. The film stars Academy-Award nominated Jennifer Lawrence, Josh Hutcherson, and Liam Hemsworth. The film grossed a total of $152.5 million on its opening weekend in North America, the third largest opening weekend gross of all time. The next film in the series is set to be released in November of 2013.