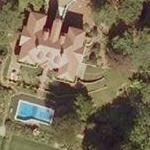 By BermudaBreeze @ 2007-12-31 09:49:26
@ 51.1538989, -0.00883529
East Grinstead, United Kingdom (GB)
Tom Cruise, the well-known actor and film producer, sold this luxurious mansion for a reported £4 Million. Cruise, perhaps best known for his eccentric personality, association with the Church of Scientology, and multi million dollar film franchises, purchased this home in 2006 with his third ex-wife Katie Holmes, for somewhere around $4.75 Million.

The star of Mission Impossible, Top Gun, Risky Business, Cruise has earned himself a name in Hollywood for his tour de force performances, and classic look. Married three times to actresses Mimi Rogers, Nicole Kidman, and Katie Holmes, cruise has three children, two of which were adopted while he was with Kidman.

A well known Scientologist Cruise has gone on the record to say the religion helped cure him of his dyslexia. He’s also been recorded agreeing with many of the churches controversial stance, including their criticisms of psychiatry, antidepressants, and other pharmaceuticals. Considered to be a cult by some experts, Scientology remains one of the most profitable churches in the world, with several celebrity endorsements, Cruise included.

This beautiful mansion has 11,331 square feet, 6 bedrooms, 5 full and 2 half bathrooms plus staff accommodations. Bought by Cruise and his ex, Katie Holmes in 2006 the property sits on a 14-acre Rede Place estate and includes private dance studio, gym and cinema. Sold for nearly $5 Million US, the mansion in East Grinstead, 30 miles south of London, is also located just a few miles from Saint Hill Manor, the UK headquarters of the controversial Church of Scientology. Four stories tall, the mansion was built in 2003 on the site of a former Victorian residence, and is reputed to have a luxurious two-person bathtub sitting on a black marble pedestal in the master bedroom.

Tom Cruise as earned a reported net worth of $570 million, pulling in close to $50 million a year. A household name in the action adventure genre, Cruise is likely to bring thrills to the theaters as long as he can manage his own stunts. One of the great action heroes of the day, Cruise now single, will likely continue acting and focusing on his relationship with his faith.
12,123 views