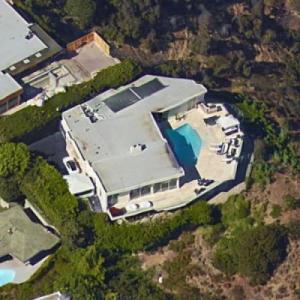 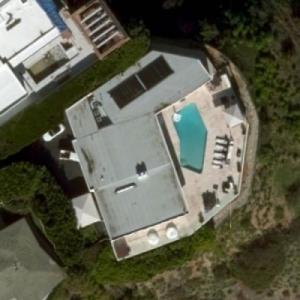 By gordonhigh @ 2015-03-20 16:53:03
@ 34.10015687, -118.38609626
Los Angeles, California (CA), US
Dan Bilzerian is a pro poker player and Instagram sensation who is a son of former Wall Street corporate raider Paul Bilzerian. He is currently leasing this house on legendary Blue Jay Way in the exclusive "Bird Streets" area of the Hollywood Hills. If you look closely on the Google maps image you can see his white Fisker Karma parked in the driveway. The property is owned by the charitable foundation of the late entrepreneur and philanthropist David Chow. Pictures of the residence can be found by clicking the first link below. Another house nearby that Bilzerian previously leased is also featured on this site. Bilzerian is an Armenian-American actor, internet personality, and gambler. He is best known for his lavish lifestyle.

Bilzerian played in the 2009 World Series of Poker Main Event, finishing in 180th place. In November 2011, Bilzerian, along with ten others including actors Tobey Maguire, Nick Cassavetes, and Gabe Kaplan, were asked to pay back winnings that they had won in poker games against Ponzi scheme operator Bradley Ruderman after Ruderman was sentenced to prison, to help pay back some of the victims Ruderman had stolen from over his criminal career. That same year, Bilzerian defended Alex Rodriguez publicly against accusations that he had gambled illegally, claiming that he was present when the alleged gambling event had taken place and Rodriguez was not present. In November 2013, Bilzerian posted an unconfirmed claim that he won $10.8 million from a single night of playing poker, and in 2014 he claimed to have won $50 million throughout the year.

In August 2014, Bilzerian was banned from a Miami nightclub for kicking model Vanessa Castano in the face during a brawl. Bilzerian stated that Castano and another woman attacked Bilzerian's female companion. Castano later filed a lawsuit against Bilzerian for her injuries. It was also reported that Castano has asked Bilzerian for US$1 million to settle the suit citing the possibility of greater punitive damages based on his income if the suit went to trial.

On December 9, 2014, Bilzerian was arrested at Los Angeles International Airport on unrelated bomb-making charges. According to the Los Angeles Police Department, Bilzerian was arrested on a fugitive warrant from Nevada and was booked at the LAPD's Pacific Division. He was released from LAPD custody on the day of his arrest after charges were dropped but was scheduled to be arraigned in January 2015 in Clark County, Nevada. In February 2015, Bilzerian pleaded no contest to a misdemeanor charge of "negligently failing to extinguish a fire in the open" and was fined $17,231.50

After all thatBilzerian still has a reported net worth of $199 Million. This life of luxury has not come without its costs, and it is known that due to his drug abuse, Bilzerian reportedly suffered two heart attacks before the age of 32.
Links: p3nlhclust404.shr.prod.phx3.secureserver.net, en.wikipedia.org
52,617 views