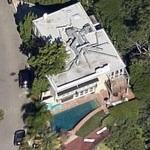 Karimova-Tillyaeva paid $5M for this house in the exclusive "Bird Streets" in July 2014 and is now attempting to lease it out. She also recently purchased Reggie Bush's former mansion in the Hollywood Hills, which she is also currently leasing out.

In addition to her massive main residence - "Le Palais" in Beverly Hills - and her three Hollywood Hills properties, Karimova and her husband also own a large estate just outside Geneva, Switzerland. The five properties combined cost the couple a total of nearly $100 million.
Links: en.wikipedia.org, www.uznews.net
1,580 views