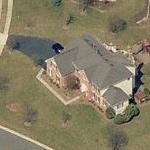 He was found dead in his home in Reston, Virginia on April 22, 2009. Kellerman's wife reported his death as a suicide, and officers at the scene said there were no signs of foul play.
Links: news.yahoo.com
1,753 views