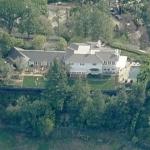 Foster purchased the property from Colin Callender, the former President of HBO films, for $11.75M in June 2012. Her previous homes in Beverly Hills and the "Bird Streets" are also featured on this site.
Links: realestalker.blogspot.com
6,592 views

Previously owned by successful british tv director and sold in 2012 for $11.75M