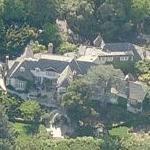 By Turneasterne @ 2012-01-07 14:59:52
@ 37.56078322, -122.36651965
Hillsborough, California (CA), US
This is the Hillsborough, CA home of Katrina A. Garnett and Terence (Terry) J. Garnett. Katrina Garnett is currently the Founder and CEO of My Little Swans, LLC., which is a travel site for families who want only the very best holidays for themselves and their children. Previously, she was the Founder, Chairman and President/CEO of CrossWorlds Software Inc. from its inception in 1996 to a successful public offering on Nasdaq (CWLD) in 2000 and acquisition by IBM in 2001. She is naturally a brunette and appeared with her darker locks in a national advertising campaign for CrossWorlds Software Inc, which received a lot of attention due to the dress she was wearing; she now sports blonde hair.

Ms. Katrina A. Garnett is a Member of the Advisory Board of RBC Venture Partners, a part of the Royal Bank of Canada. She is an active technology startup investor and her prior early seed investments include Siebel Software and Salesforce.com and her current Internet and mobile investments include Adchemy and Tapulous, makers of Tap Tap Revenge, the music games with over 25 milion users. She sometimes states that she is either a homemaker, private investor, or retired, according to political records regarding campaign contributions and donations. Her husband, Terry Garnett, is the Co-Founder and Managing Director of Garnett & Helfrich Capital, which is a private equity and venture capital firm specializing in seed, start-ups, late venture, buyouts, and turnaround financings in mature companies. Katrina Garnett is listed as a private investor in Garnett & Helfrich Capital.

As a software industry luminary, she was featured twice on the cover of Forbes magazine, selected by Fortune magazine as Chief Executive Officer of one of their 25 top startup technology companies in 1997 and regularly interviewed by leading TV shows such as CNBC and CNN. She was also featured in a published comic book called the “Titans of Finance: True Tales of Money & Business.” The comic book features her in a story entitled "L@@K the Part." In addition to her, the comic book features: Ronald (Ron) O. Perelman, Michael W. Vranos, also known as Mike “The V-Man” Vranos, Jay Goldinger, also known as “Jaybird” Goldinger, Victor Niederhoffer, and "Chainsaw" Al Dunlap. The comic book is a collaboration between a cartoonist and a finance columnist, which casts Wall Street executives and traders as heroes and villains.

Here is her story in the comic book: