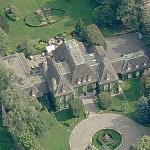 Through junk bond leveraged buyouts, which were at their most popular in the mid 1980s, his Campeau Corporation gained control of Allied Stores and Federated Department Stores, owner of Bloomingdale's. Campeau retained famous banker Bruce Wasserstein to assist with the transactions. However, the debt obligations that needed to be covered following the merger were too large and exacerbated by a market downturn that hurt retail sales; Campeau Corporation was unable to meet its debt obligations. Federated and Allied eventually filed for bankruptcy reorganization. The company was eventually acquired by the Reichman brothers who went bankrupt themselves and Campeau Corporation ceased to exist.

The property was used as a filming location in the 1997 Carl Reiner movie, That Old Feeling starring Bette Midler and Dennis Farina.
Links: en.wikipedia.org
2,915 views