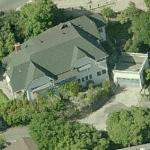 By jdubble07 @ 2012-12-23 06:20:23
@ 34.11059658, -118.31853979
Hollywood, California (CA), US
Louis Zamperini is a World War II prisoner of war survivor, inspirational speaker, and former American Olympic distance runner. Following his performance at the 1936 Olympics, Adolf Hitler requested a personal meeting with Zamperini. During the same Olympics, Zamperini climbed a flagpole and stole the personal flag of Hitler, which he still has today.

In December 2012 it was announced that Angelina Jolie will make her directorial debut with the film "Unbroken" which is based on Laura Hillenbrand's best selling 2010 book of the same name about Zamperini's life.
Links: en.wikipedia.org
1,308 views