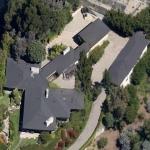 Muhammed bin Fahd is a son of the late King Fahd of Saudi Arabia, and is rumored to be a candidate for King himself in the coming years. Currently, he serves as governor of the Eastern Province of Saudi Arabia. He does not use this property as a residence, but rather as the offices for his real estate firm Ridgecrest Estates.

The Prince also owns several other properties, including a massive two-home compound on Nimes Road in Bel Air with a total living space of 54,000+ square feet. One of the houses comes equipped with 41 bathrooms, possibly a record for a single-family home. He also has a large home in Santa Barbara, which he has owned since he graduated from college at UCSB in the 1970s.
Links: en.wikipedia.org
3,145 views