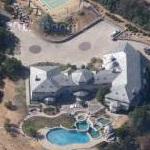 U.S. prosecutors seized a nine-bedroom California mansion and, later, a Picasso lithograph they said were illicit spoils of office for Pavlo Lazarenko, a former prime minister of Ukraine.

A screengrab shows an aerial view of the Novato, Calif. mansion seized by U.S. prosecutors.

Mr. Lazarenko, who prosecutors said siphoned off hundreds of millions of dollars during his time in government, was convicted in the U.S. in 2004 of money laundering and conspiracy, along with several other counts that were later dropped.

Following an appeal, he received an amended eight-year prison sentence in 2009, and was ordered to forfeit $22.8 million in assets. Mr. Lazarenko was released last November.

An order authorizing the seizure of the mansion, dated Oct. 8 and signed by U.S. District Judge Charles Breyer, stipulated that Mr. Lazarenko bought the Novato, Calif. home in 1998 with a $6.75 million check drawn against Dugsbery Inc., a company prosecutors say he created. A listed phone number for the company is no longer in service.
Links: en.wikipedia.org
1,277 views