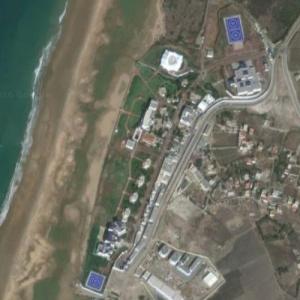 The property is surrounded by a 1,500m wall and is staffed by over 30 Moroccan Royal Guards and includes it's own medical facility and restaurants. There is reportedly also garage facilities for an estimate of 100 of King Salman's cars.

Between 2014 and 2016, King Salman has also completed construction on a new palace (just above the southernmost helipad) a massive oceanfront tent (to the southwest of the northernmost helipads), and the three helipads themselves.
Links: en.wikipedia.org
2,652 views