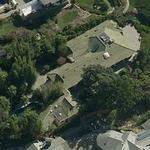 According to the link below, Angelina Jolie is quietly leasing this house following her divorce from Brad Pitt.
Links: www.dirt.com
2,586 views