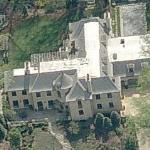 As of December 2020, Zients is on leave from his position as chief executive officer of Cranemere, an investment firm.

As of October 2020, Zients was co-chair of the presidential transition of Joe Biden.
Links: en.wikipedia.org
1,816 views