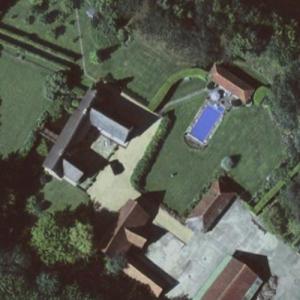 Rugged and old fashioned on the outside, the interior has been transformed into a luxurious £1.75 million house in the English countryside. Once a 15th century timber house in East Anglia now the interior houses a mansion fit for the King of Westeros himself. The medieval house is secluded in what is one of the prettiest areas in England and sits upon 8.2 acres of gardens and grounds surrounding. It has an entrance hall, a drawing room, sitting room and cloakroom, kitchenette, dining room and utility room.There is a master bedroom suite with ensuite bathroom. There are four double bedrooms.

The house is set within magnificent gardens and grounds which have a variety of mature trees and plants providing color and privacy. There are paddocks, with post and rail fencing, along with a large and productive vegetable garden and an orchard. Other amenities include a hard surface tennis court and a heated swimming pool.

The home is the perfect setting for Harrington’s seemingly fairytale romance with fellow actor Rose Leslie, who co-starred on Game of Thrones. From being scripted to falling in love, to now living together as a couple, the remote getaway will hopefully make a great home for the young couple.

The actor, who originally dreamed of becoming a journalist, has earned a tidy $12 Million net worth. Now a household face, one of the most iconic and longest lasting stars of Game of Thrones, Harrington earned a reported $1.1 Million Per Episode. Not a bad career change overall.
Links: en.wikipedia.org
18,157 views