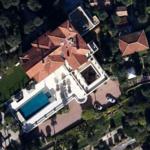 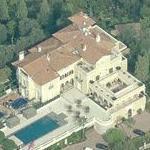 By jdubble07 @ 2008-05-01 21:44:42
@ 43.693256, 7.330627
St Jean Cap Ferrat, France (FR)
This is the Microsoft co-founder, Paul Allen’s "Villa Maryland" where Angelina Jolie, Brad Pitt, Zahara, Maddox, Pax, and Shiloh stayed back in the day while Angelina was waiting to give birth. Allen in his day was an American business magnate, researcher, investor, and philanthropist, best known for his work as a co-founder of the Microsoft Corporation with childhood friend Bill Gates in 1975. Allen and Gates helped spark the microcomputer revolution of the 1970s and 1980s and became the world's largest personal computer software company. Together they single handedly revolutionized the personal computer industry. Allen was ranked as the 44th-wealthiest person in the world by Forbes in 2018, with an estimated net worth of $20.3 billion at the time of his death.

Allen left active operations at Microsoft in early 1983 after a Hodgkin lymphoma diagnosis, but remained on the board as vice chairman. With a need to prioritize his health, he and his sister, Jody Allen, founded Vulcan Inc.,a privately held company that managed his various business and philanthropic efforts. Given the success of Microsoft, Allen had a multi-billion dollar investment portfolio including technology and media companies, scientific research, real estate holdings, private space flight ventures, and stakes in other sectors. Allen even purchased the Seattle Seahawks of the National Football League and the Portland Trail Blazers of the National Basketball Association, and was part-owner of the Seattle Sounders FC of Major League Soccer. In 2000 he resigned from his position on Microsoft's board and assumed the post of senior strategy advisor to the company's management team, as his health continued to decline.

Allen was also the founder of the Allen Institutes for Brain Science, Artificial Intelligence and Cell Science, as well as companies like Stratolaunch Systems and Apex Learning. Through his philanthropic efforts, Allen gave more than $2 billion to causes such as education, wildlife and environmental conservation, the arts, healthcare, community services and more. In 2004, he funded the first manned private space plane with SpaceShipOne. As a businessman, Allen received numerous awards and honors in several different professions and was listed among the Time 100 Most Influential People in the World two years in a row. Allen died of septic shock related to his cancer on October 15, 2018.
38,410 views