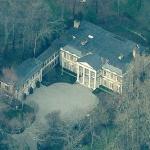 The home was previously owned by Alexander Haig, a United States Army general who served as the United States Secretary of State under President Ronald Reagan and White House Chief of Staff under Presidents Richard Nixon and Gerald Ford. He also served as Vice Chief of Staff of the Army, the second-highest ranking officer in the Army, and as Supreme Allied Commander Europe commanding all US and NATO forces in Europe.
Links: en.wikipedia.org, www.washingtonpost.com
3,851 views