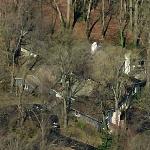 By jdubble07 @ 2013-10-23 12:21:28
@ 38.93589193, -77.12268621
McLean, Virginia (VA), US
Ted Kennedy was the senior United States Senator from Massachusetts and a member of the Democratic Party. He was the second most senior member of the Senate when he died and was the fourth-longest-serving senator in United States history, having served there for almost 47 years. As the most prominent living member of the Kennedy family for many years, he was also the last surviving son of Joseph P. Kennedy, Sr.; the youngest brother of President John F. Kennedy and Senator Robert F. Kennedy, both victims of assassination; and the father of Congressman Patrick J. Kennedy.
Links: en.wikipedia.org
1,608 views