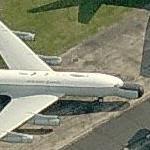 By kjfitz @ 2007-08-16 14:18:18
@ 39.784751, -84.107198
Dayton, Ohio (OH), US
During the early 1960s, NASA and the Department of Defense needed a mobile tracking and telemetry platform to support the Apollo space program and other unmanned space flight operations. In a joint project, NASA and the DoD contracted with the McDonnell Douglas and the Bendix Corporations to modify eight Boeing C-135 Stratolifter cargo aircraft into Apollo/Range Instrumentation Aircraft. Equipped with a steerable seven-foot antenna dish in its distinctive “Droop Snoot” or “Snoopy Nose,” the EC-135N A/RIA became operational in January 1968. The Air Force Eastern Test Range at Patrick Air Force Base, Fla., maintained and operated the A/RIA until the end of the Apollo program in 1972 when the USAF renamed it the Advanced Range Instrumentation Aircraft.

Transferred to the 4950th Test Wing at Wright-Patterson Air Force Base, Ohio, in December 1975 as part of an overall consolidation of large test and evaluation aircraft, the ARIA fleet underwent numerous conversions, including a re-engining that changed the EC-135N to the EC-135E. In 1994 the ARIA fleet relocated to Edwards Air Force Base, Calif., as part of the 412th Test Wing; however, taskings for the ARIA dwindled because of high costs and improved satellite technology, and the USAF transferred the aircraft to other programs such as J-STARS (Joint Surveillance and Target Attack Radar System).