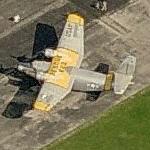 Thirteen YC-125As were ordered in 1948 to test the aircraft’s ability to haul troops and cargo. Ten additional aircraft were ordered, slightly modified as YC-125Bs, to test their capabilities in the Arctic rescue role. The first flight of the YC-125A occurred on Aug. 1, 1949, and deliveries to the USAF began in 1950.

Tests found the aircraft to be significantly underpowered for the intended missions. Furthermore, helicopters were recognized as a better solution for moving troops into forward areas and for performing rescue missions. As a result, the YC-125s were sent to Sheppard Air Force Base, Texas, to be used as ground maintenance trainers. They were declared surplus in 1955.

The aircraft on display is painted to represent the YC-125B used for cold weather testing and based at Wright-Patterson Air Force Base, Ohio, in 1950. It was placed on display in 1995.
Links: www.nationalmuseum.af.mil
1,039 views