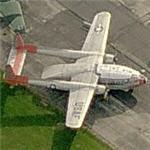 By kjfitz @ 2007-08-16 14:11:00
@ 39.784466, -84.108252
Dayton, Ohio (OH), US
The C-119, developed from the World War II Fairchild C-82, was designed to carry cargo, personnel, litter patients and mechanized equipment, and to drop cargo and troops by parachute. The first C-119 made its initial flight in November 1947, and by the time production ceased in 1955, more than 1,100 C-119s had been built. The USAF used the airplane extensively during the Korean War and many were supplied to the U.S. Navy and Marine Corps and to the Air Forces of Canada, Belgium, Italy and India. In South Vietnam, the airplane once again entered combat, this time in a ground support role as AC-119 gunships mounting side-firing weapons capable of firing up to 6,000 rounds per minute per gun.

The C-119J on display was specially modified for the mid-air retrieval of space capsules re-entering the atmosphere from orbit. On Aug. 19, 1960, this aircraft made the world’s first midair recovery of a capsule returning from orbit when it “snagged” the parachute lowering the Discoverer XIV satellite at 8,000 feet altitude, 360 miles southwest of Honolulu, Hawaii.

The airplane was delivered to the museum in November 1963.
Links: www.nationalmuseum.af.mil
945 views