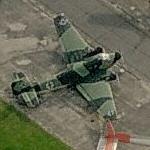 The Ju 52 was obsolete as a bomber by 1939, but because of its durability, simplicity of design and handling characteristics, it continued to serve throughout World War II as a versatile workhorse of the German transport fleet. For a period, Adolph Hitler used a Ju 52 as his private transport. Ju 52s delivered the attacking forces and their supplies during the German invasion of Norway, Denmark, France and the Low Countries in 1940. Almost 500 Ju 52s participated in the historic airborne assault on the island of Crete in May 1941, and Junkers later supplied Rommel’s armored forces in North Africa.

Approximately 30 different countries have flown Ju 52s. The aircraft on display was donated to the museum by the Spanish government in 1971. Note: This particular aircraft is a CASA 352L.
Links: www.nationalmuseum.af.mil
751 views