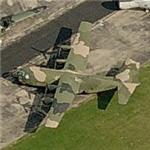 By kjfitz @ 2007-08-16 14:40:36
@ 39.78451, -84.107614
Dayton, Ohio (OH), US
The C-130 was originally designed as an assault transport capable of operating from unpaved, hastily prepared airstrips. On Aug. 23, 1954, the Hercules made its first flight, and by 1976 more than 1,200 C-130s had been ordered, including ones equipped for radar weather mapping and reconnaissance, mid-air space capsule recovery, search and rescue, ambulance service, drone launching, and mid-air refueling of helicopters. The C-130 could transport up to 92 combat troops and their gear or 45,000 pounds of cargo. Where facilities were inadequate, the Hercules could deliver its cargo by parachute or by low altitude ground-cable extraction without landing.

Twenty-eight C-130s were converted to side-firing gunships, primarily for night attacks against ground targets. This AC-130A was modified at Wright-Patterson Air Force Base, Ohio, by the Aircraft Modification Division of the 4950th Test Wing as the prototype for the gunship version and was initially equipped with four 20mm and four 7.62 multi-barrel guns, a searchlight and target sensors. After testing in Southeast Asia in 1967, it was used as a test bed for additional armament, sensor and fire control development. Later AC-130 gunships mounted improved sensors, a digital fire control computer and heavier armament.
Links: www.nationalmuseum.af.mil
911 views