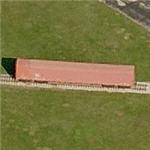 By kjfitz @ 2007-08-16 14:24:13
@ 39.786261, -84.106321
Dayton, Ohio (OH), US
On Dec. 19, 1986, the White House announced President Ronald Reagan’s approval to develop a rail garrison system for basing part of the Peacekeeper Intercontinental Ballistic Missile force. To increase survivability of this force, 50 Peacekeepers would be deployed in existing Minuteman silos and 50 more would be mounted on 25 USAF trains, two per train. Each train would consist of two locomotives, two security cars, two missile launch cars housing the missiles, one launch control car, one fuel car and one maintenance car. Each launch car carried one Peacekeeper ICBM, in a launch tube that could be elevated to fire the missile from the bed of the car. The trains were parked in shelters located on USAF Strategic Air Command bases throughout the continental United States, with the missiles on continuous alert. When necessary, the trains could be dispersed onto the nation’s rail network, making it extremely difficult for an enemy to target and destroy them. Development of the rail garrison deployment system was terminated in 1991 as Cold War tensions eased.

This prototype launch car was delivered to the museum in 1994.
Links: www.nationalmuseum.af.mil
1,372 views