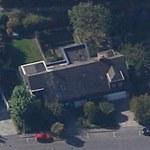 Genscher has been living here since 1977, not far away from Bonn, West Germany's capital.
Links: en.wikipedia.org
513 views